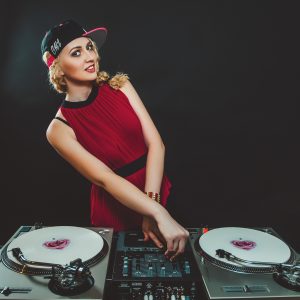 20-April-2015 ? Los Angeles, CA ? DJ Eliza May has quickly become one of the most recognizable female turntable queens in the international turntablism scene.

If you’re a fan of DJs who are skilled in the art of creative mixing, scratching and beat juggling, then this young artist is definitely someone who absolutely needs to be on your radar.

As a female turntablist, DJ Eliza May’s scratch techniques are second to none. “I love to amaze people with my skills, showing them what I’ve been working on for days, weeks or even months,” says Eliza. “It’s an old school technique and I want to help keep the craft alive.”

Many widely revered DJs rely on computer software programs to generate unique sounds, but DJ Eliza May creates most of her sets in front of the crowd flawlessly incorporating the scratch style she is known for, and juggling the beats by manipulating the vinyl records on her turntables.

“I love to feel the rhythm with my hands… It’s like you can touch the music when you play from vinyl,” explains Eliza. ?I love when I need to put in work to learn turntablism techniques… When I started working on scratch, I used to practice 8 hours a day.”

In the world of hip-hop, the scratch technique is a major factor in setting DJs apart from one another. Renowned for his work, DJ Qbert explains, “Skratching allows control over the sound’s pitch, speed and rhythms with our hands just like a musical instrument. So if you are really into manipulating sounds in the moment like any musician would, then skratching is quite important… especially because you can’t make these kinds of sounds with any thing else.”

The DMC World DJ Championships, which began in 1985, have continued to be the most prestigious competition where DJs are given the opportunity to put the skills of their craft on display. With a reputation like Eliza’s, it comes as no surprise that she was one of the few female DJs in the world who participated in the DMC Online World DJ Championships event last year, as well as this year.

A huge testament to her talents, DJ Eliza May also had her first scratch battle at the prestigious WMC event, a music conference where the best of the best are given the chance to showcase their skill.

Born Maria Ershova, DJ Eliza May grew up in the small town of Raduzhniy in Siberia, Russia. At the age of five she began studying music, an early decision that laid the foundation for the incredibly successful DJ career she enjoys today.

While in Russia DJ Eliza May was the resident DJ at both The Artek and Pecado Bar in Tyumen, Siberia for two years; and, she was also the first female Russian DJ to have her mixes broadcast on Tenerife 105 FM’s Shaker radio show in the Canary Islands.

She recalls, “At that time I was a host DJ at Sunlife.FM radio and played at different events at the best clubs in cities like Moscow, Surgut, Nefteyugansk, Raduzhniy, Yeysk, and Novosibirsk.”

Today she is not only requested to spin her unparalleled sound at international clubs and events, but she has proven herself as a top competitor in DJ competitions around the world as well.

DJ Eliza May competed against Russia’s best DJs during the Russian Delphic Games and solidified her spot as one of Russia’s top DJs. Due to her top finish in the games, the extraordinarily talented DJ went on to compete at the Delphic Games of CIS, where she took home Third Place.

Iconic DJ Rob Swift recognized DJ Eliza May’s prowess as a turntable DJ after she submitted a video of her work to the Pump Me Up Challenge earlier this year.

“Eliza is one of only 2 female DJs who responded to the challenge. After watching her video I have a new found respect for her skill level and her pedigree as a DJ. I bow down to DJ Eliza May,” explains DJ Rob Swift. “This video solidifies her standing amongst the DJ/Turntablist community; and I am truly honored to call her a colleague… And that rhythm she was rockin’ from 0:58 to 1:03 was funky as shit. “

As for her musical tastes and what she presents to her audience, Eliza says, “I love to connect different genres in one set, like Hip-Hop, Trap and Electro House for example. And of course I like to incorporate scratch and juggling into my sets.”

DJ Eliza May is one of the only DJs to pass the DJ exams at Audio school by DJ Groove with a 5++, which continues to be the highest score in the history of the school. Established in 2006, Audio School by DJ Groove was the first Russian school of electronic music and the only certified center in Russia for training in Ableton Live, an imperative tool for DJs in the industry.

“I love music and having the ability to play and be creative with it! I enjoy using different techniques to express a nice flow from start to finish,” admits Eliza. “And being able to feel the connection with the crowd as I take them on a journey is the most amazing experience in the world.”

Above all, DJ Eliza May is recognized for her ability to play a unique range of music including hip-hop, R&B and EDM in a way that gets her crowd into the zone.

Things to Do in Tulum, Mexico