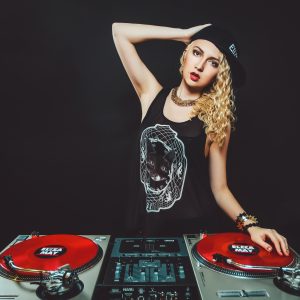 LOS ANGELES, CA, February 09, 2016 ?– Arriving as one of the worlds’ finest DJs and turntablists, DJ Eliza May has brought her explosive concoction of turntablism, creative mixing, scratching, beat juggling, body tricks and party rocking to preeminent shows, clubs, events and competitions throughout Europe and the U.S.

“I think the main purpose for a DJ is to make people dance and to rock the parties,” Eliza May said. “But for me now, it’s not only about music and mixing, but it is also about mastering different genres and showing some skills. And of course, DJs must have good musical taste and basic music education, be creative and to have their own style.”

A native of the Siberian town of Raduzhniy, DJ Eliza May was born Maria Ershova, and she’s built an outstanding reputation for her awe-inspiring DJ and turntablist talents with music spanning R&B, hip-hop, electronic dance and pop.

“There are not many female turntablists,” she said. “But I think it’s not about being a man or a woman. It’s all about personality, talent and passion.”

Recently applying those ingredients for success, Eliza May performed at the 2016 National Association of Music Merchants (NAMM) show in Anaheim, Calif. At NAMM, she performed sets for Mixars, a new pro DJ lineup from dBTechnologies, and Pioneer DJ, a leading Japanese manufacturer of pro DJ products.

“I played a few genres like hip-hop, house, trap, twerk, dancehall and breaks,” she said. “My first and second performances were for the Mixars booth, and the next day was for Pioneer DJ. Lots of people know me as a scratch DJ, but in these performances, I made the main accent on the mixing and added a little bit of scratch and juggling with body tricks.”

The latest installment of NAMM, the world’s largest trade-only event for the music products industry, was held at the Anaheim Convention Center. It ushers in many famed musicians and exhibitors who promote their signature models and equipment.

“I must say that this year the event presented DJing to the fullest! Almost every booth had a stage for the DJs and different kinds of DJ equipment,” said Eliza May. “Thanks to Pioneer DJ and to Mixars. They have some awesome DJ mixers and turntables. It was exciting to perform with their new products because of all the opportunities this new equipment gives.”

For Pioneer DJ, Eliza May performed at one stage with famed DJs such as Invisibl Skratch Piklz and Beat Junkies. “It was great to meet so many talented and creative musicians and DJs,” she said.

Eliza May trained and learned scratch and beat juggling techniques from the legendary DJ Qbert, a DMC DJ Hall of Fame inductee who was named America’s best DJ in 2010, and has been a longtime collaborator with Mix Master Mike, of Beastie Boys fame.

Longtime music producer, journalist and radio programmer Billy Jam familiarized with Eliza May’s DJing strength when he saw her perform at San Francisco’s prestigious California Academy of Sciences, in 2014. There, DJ Qbert introduced Billy Jam to Eliza May and prefaced their meeting with a resounding endorsement of the Russian virtuoso.

“Before introducing me to her,” Billy Jam said, “DJ Qbert described Maria Ershova as not simply a gifted musician, but a rare breed of musician, a turntablist with a background in classical music training and one of those few intelligent, dedicated, focused artists who can envision the bigger picture at all times. And since that initial meeting and performance, at which Mary had the audience spellbound by her performance, I have gotten to know Maria Ershova and discovered how true that description was.”

She also developed her electrifying skills, methods and artistry under the instruction of DJ I-Dee, who won the 2014 DMC Online World DJ Championship and other illustrious titles such as the DMC Battle for USA Supremacy, Scribble Jam and Roc Raida’s Gong DJ Battle.

Eliza May, who began studying music when she was 5 years old, has performed live at distinguished clubs and shows throughout Russia, including in Moscow, Tyumen, Krasnodar, Surgut, Nefteyugansk and Tobolsk. She’s DJ’d other top international venues such as Palais Maillot (Paris, France), Sketch Lounge (Baku, Azerbaijan), Shadow Lounge (St. Julian’s, Malta) and Tex Mex (Sliema, Malta). Eliza May was for two years the resident DJ at The Artek and Pecado Bar in Tyumen, Siberia, and she took part in her debut scratch battle at the 2014 Winter Music Conference (WMC) in Miami.

“Every gig is very memorable,” Eliza May said. “It always feels awesome to play for other people, to see them dancing, to feel their emotions. The interaction and connection with your crowd create unbelievable communication channel. It’s amazing exchange of the energies!”

Finishing in 2013 as the runner-up in the young DJs category at an annual international competition titled the Russian Delphic Games, Eliza May is the first female Russian DJ to have her mixes broadcast on the Shaker radio station – Tenerife 105 FM – in the Canary Islands (Spain). She served as a host DJ for Sunlife.FM radio, competed and placed third in the Delphic Games of CIS and earned recognition from DJ Rob Swift in his Pump Me Up Challenge, last year.

In 2014 and 2015, DJ Eliza May competed as one of the few female DJs in the DMC Online World DJ Championships, which were originally founded in 1985 and pit the world’s best DJs in competition.

“In an industry that is currently saturated with mediocre musicians and artists, Miss Ershova’s extraordinary talent and abilities stand out and demand attention,” said the UK’s internationally acclaimed DJ Angelo. “She is already revered worldwide as a highly capable musician with unique skills, having made significant contributions in the field of DJing, turntablism, and music production for many years.”

Eliza May is a DJ and turntablist from Raduzhniy.

Female Turntablists on the Ris...